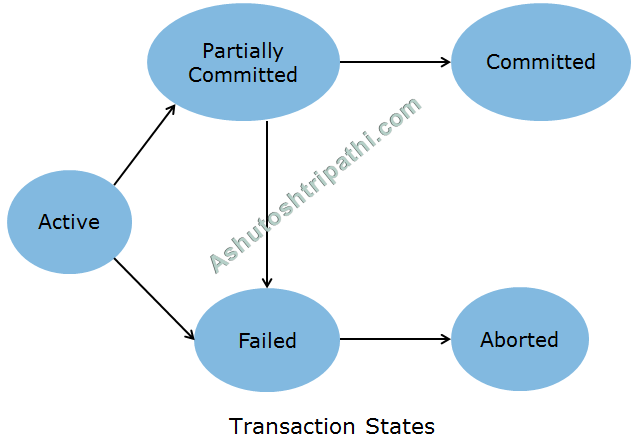 To understand Transaction states, we need to know the following points:

We therefore establish a simple abstract Transaction model. A Transaction must
be in one of the following states:

The state diagram corresponding to a transaction is shown above. Following points to be noted from the above mentioned transaction states:

A transaction enters the failed state after the system determines that the transaction can no longer proceed with its normal execution (for example, because of hardware or logical errors).

Such a transaction must be rolled back. Then, it enters the aborted state. At this point, the system has two options:

We must be cautious when dealing with observable external writes, such as writes to a terminal or printer.

Once such a write has occurred, it cannot be erased, since it may have been seen external to the database system. Most systems allow such writes to take place only after the transaction has entered the committed state.

One way to implement such a scheme is for the database system to store any value associated with such external writes temporarily in nonvolatile storage, and to perform the actual writes only after the transaction enters the committed state. If the system should fail after the transaction has entered the committed state, but before it could complete the external writes, the database system will carry out the external writes (using the data in nonvolatile storage) when the system is restarted.

Handling external writes can be more complicated in some situations. For example suppose the external action is that of dispensing cash at an automated teller machine, and the system fails just before the cash is actually dispensed (we assume that cash can be dispensed atomically). It makes no sense to dispense cash when the system is restarted, since the user may have left the machine. In such a case a compensating transaction, such as depositing the cash back in the users account, needs to be executed when the system is restarted.

For certain applications, it may be desirable to allow active transactions to display data to users, particularly for long-duration transactions that run for minutes or hours. Unfortunately, we cannot allow such output of observable data unless we are willing to compromise transaction atomicity. Most current transaction systems ensure atomicity and, therefore, forbid this form of interaction with users.

This site uses Akismet to reduce spam. Learn how your comment data is processed.

“spaCy” is designed specifically for production use. It helps you build applications that process and “understand” large volumes of text. It can be used to build information extraction or natural language understanding systems, or to pre-process text for deep learning. In this article you will learn about Tokenization, Lemmatization, Stop Words and Phrase Matching operations using spaCy
enetwork.ai | Your Guide in Data Science and Machine Learning journey
If you are an aspiring data scientist or an experienced professional who is trying to make his career in Data Science, then this platform is for you. In Mock Interviews, we focus on high-quality interactive interview sessions. You have the option to schedule two kinds of Mock Interviews with us.
#Boosting is the technique which helps to improve the accuracy of the #machinelearning models. We apply boosting when none of the available models gives the good accuracy.
Guys, if you are someone who is interested in #AI #ML and #datascience , here is the list of 20 influencers whom you must follow.
Guys, please find the quick refresher on #Overfitting in #ml #model